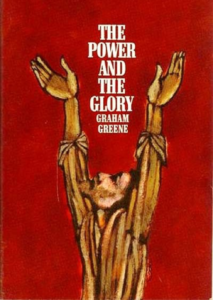 In a poor, steamy and barren Mexican state, the Red Shirts have gained control, outlawed God, and murdered priests. But one still lives, the whisky priest, who has an illegitimate daughter and believes he has lost his soul. Now he is on the move, trying to escape his executioners. As he tramps anonymously through the glowing white streets of baking villages and tortuous mountain trails – which lead not to heaven – it is a long time before he is able to stop running and find God.

I listened to this audio-book, narrated by Andrew Sachs. I really enjoyed listening to this story, Andrew Sachs narrated in such a way that I could easily imagine the scenes. Really good how he had different voices for each person, especially the voice of the main character, the priest, and another character: the half-caste.
The tone of the voices fitted the characters very well. It made me feel as if I were traveling in Mexico, getting to know that world a little better.

The story made me think. It shows really well how good intentions can be lead to bad results and vice versa. For example: precisely because the priest believes he is in state of mortal sin, he can feel love and compassion for everyone he meets (except for himself, it seems, that is really sad). So it seems that it was a good thing that he failed. Some other characters in the book that try to do good, end up oppressing people. All this really makes me wonder. When you try to do good, it might very well be that you are proud. Is it then better not to try? Be more relaxed, so you can feel more love and connection with other people? What do I believe about sins, forgiveness, charity? Can you ever feel sure of God’s forgiveness without becoming complacent? Or is it somehow a good thing to be as anxious as this priest?

I think I will be pondering the themes of this book for quite a while.

But the most impressive theme is the hope that shines from the book. Even though there is so much poverty and failure, we see that precisely there, hope breaks through.