A book review of ‘The complete Julian‘. A modern translation of all the writings of Julian of Norwich. 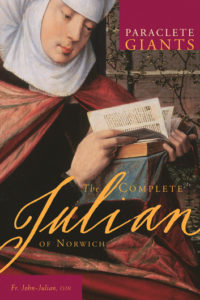 Reading this book is a bit like having a mystical experience. Julian describes the visions that she has had in such a natural and realistic way that it feels as if I could watch over her shoulder when she saw them.

The book consists of descriptions of these visions, and then also the spiritual insights on their meaning that she received in the years afterwards, when she was pondering them and asking God to explain things.

The version of the book that I read contained lots and lots of notes, interspersed through the text, they were helpful notes, but did rather break the line of the story. I would have preferred that the notes had been somewhere in the back of the book. (but perhaps that was mostly a problem because I read the e-book, the paper version probably had the text on one side and the notes on the opposite side)

The notes were very helpful in providing the necessary background. It is hard to imagine what her life was like, being an anchoress in a time that was so dark with all the wars and the pest and other disasters. Plus the fact that most people were very afraid of God and judgments and trying to buy forgiveness.

I think perhaps for that reason, God thought it was necessary to give someone these visions about his love, to comfort the people that were so afraid. And, although I do not live in that time (thankfully!) I still have experience with the same fears. I think perhaps all people naturally fear God, especially the more we realize how holy he is, and how much we are failing. So her message is still most welcome.

I especially remember her vision of the Lord and the servant, and its explanation. That was most clarifying. It shows the deplorable state we are in, but without attaching any blame. On the contrary it shows only God’s love, and also our love for God. And how much we are united to Jesus.

There is just so much in this book! As I read it, it sometimes felt as if it was the same message (love) over and over again, but now that I am trying to summarize, I realize that there was much more in it. Lots of beautiful things said about the Trinity, and how Jesus is also our mother. And we are in God, but God is also in us. And we can only know God inasmuch we know ourselves and, paradoxically enough, also vice versa. How we are always united to God, even though it often doesn’t feel that way.

Amazing how she tells so abundantly about God’s love for us. Never making light of sin, but always pressing that in God’s eyes we are his beloved children who unfortunately keep falling. At one point near the end of the book she summarizes it thus: “And I understood that while we are in this life, it is most helpful to us that we see both of these at once; for the higher point of view keeps us in spiritual solace and true rejoicing in God, and the other, that is, the lower point of view, keeps us in fear and makes us ashamed of ourselves. But our good Lord wills always that we see ourselves more from the point of view of the higher (but not give up knowledge of the lower) until the time that we are brought up above, where we shall have our Lord Jesus for our reward, and will be filled full of joy and bliss without end.”