A book review of ‘The End of the Affair’ by Graham Greene.

Warning: the following review does contain some spoilers, I need to explain some of the plot in order to describe why it moved me so. I will restrict that to the minimum, but if you want to be surprised, then you must stop reading now and read the book first. 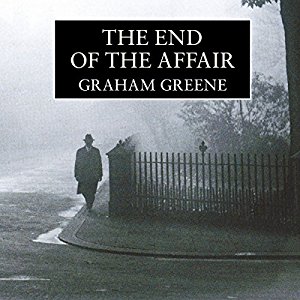 “This is a record of hate more than of love,” writes Maurice Bendrix in the opening passages of The End of the Affair, and it is a strange hate indeed that compels him to set down the retrospective account of his adulterous affair with Sarah Miles.

Sometimes it is just so good to pursue a negative thought to its extreme! It will bring you some profound surprises. A year ago I had this experience when reading the book ‘Confessions of a Justified Sinner’, and now again when I read this book ‘The end of the affair’ by Graham Greene.

Now just to put this right immediately: ‘The end of the affair’ is really not that negative. The end is very positive and shows deeply what it means to love and be loved.

But to come back to what touched me most deeply, this pursuing of a negative thought to its extreme. At some point in the book, Sarah begins to experience the existence of God, but she hates him for it. And because she hates God so much, she wants to hurt him. And then she knows that she could do that by destroying the thing in her that he loves most. Something in her soul that God finds lovable. Now this is such a profound idea! If we know that we can hurt God that way, then we know thus that he loves us! I am so touched that even when we are very much focused on hurt and pain, we will find God in there.

Graham Greene is good at describing such extremes. In another book that impressed me deeply, The power and the glory, he showed how hope was found in the deepest misery. And both in that book, and also in this one, he shows how love can be abundantly present in the lives of people who break all God’s commands. Not that breaking all God’s commands is recommended as the solution to find love. In this book it is also shown so clearly how Sarah started to heal, however painfully, when she began to try keeping them. It is so paradoxical how at one side it is good to try and live according to God’s word, and at the other side it is also good not to be bothered at all by our failures. I have tried to put down some conclusion in words, but I really can’t1. There is no simple rule, but Graham Greene just shows how things work in his stories.

I said the book ends with showing what it means to love and be loved. Sarah did not love herself. She only saw what was negative in her. It was all very recognizable and understandable. But in the end of the book, some background of her life was given, which showed how much all of this might have been quite a logical consequence of the things she suffered. And lots of good things were told about her through the eyes of the other characters. Even though she never knew how much she actually meant to a lot of people, her love actually did show through all her actions. The book shows what a struggle it can be to accept that we are loved.

But we will get there, eventually.